Paige and I are happy to welcome this handsome fella, Sheldon Cooper, into our Smith home because he brings a lot of joy and love. (Sheldon Cooper is the name we have chosen to call him, and believe me… It fits!… Ba-zinga!) Sheldon is smart and is working hard on all that he learned through the New Leash On Life program that is a partnership with the Humane Society and the Department of Correction. Sheldon finished his END_OF_DOCUMENT_TOKEN_TO_BE_REPLACED

Don’t judge someone just because they sin differently than you.

Something to think about. We all have our own faults. 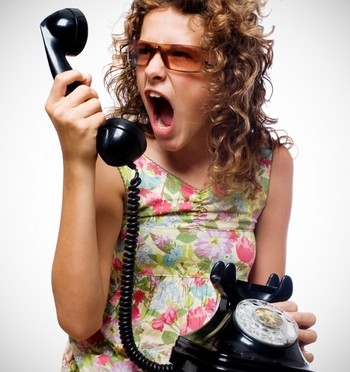 No one likes to be bothered by telemarketers because they are annoying. Can’t they just take a simple “No”?

Getting rid of telemarketers is mainly about the approach.

Ericka Elson has worked at a telemarketing company for two years. During that time, she has had to place many unwanted calls.

Generally, a successful telemarketer has a 96% chance of getting turned down. This 4% chance of making a sale drives telemarketers to keep you on the phone as long as they can. Why?

I think that this is worth sharing [StandTrue.com]:

I know there are a lot of different reasons that people are against President Obama’s heath care reform; the idea of socialized medicine is causing a huge uproar across the country. I am not going to address any of those reasons; I will simply stick to what I believe is the most important reason why we must oppose this deadly plan.

“In my mind reproductive care is essential care, it is basic care”: President Obama in a speech to Planned Parenthood, the largest provider of child killing (abortion) in our nation.

If you think that the President’s so called “health care” reform will not include the funding of child killing you are sadly mistaken. President Obama has already made promises to expand access to child killing and open the funding floodgates. Within his first week in office he reversed legislation and started sending our tax dollars to pay for killing children overseas.

If you truly doubt that abortion will be part of this health care reform, I challenge you to visit http://stoptheabortionmandate.com/ when you finish reading this article.

I have had dozens of people writing me complaining about Stand True’s not supporting this health care reform bill. I have heard all the stories about how they come from families who can’t afford health care and I should try and put myself in their shoes. (As an aside, I have no health care.) I have been told that we are too one-sided about abortion and we need to think about all the poor people who need health care.

I understand these arguments and I do have sympathy for those who do not have health care, like myself. However, I refuse to accept this as an excuse to sell out innocent children and allow funding for their death as a trade off. We cannot accept any kind of health care bill that funds child killing, period.

Imagine of the health care bill had funding for the killing of anyone over the age of 60 to help stop population growth. That is obviously absurd and no one in their right mind would accept that kind of a bill. What if the bill had funding for parents who are tired of their handicapped 5 year old to kill that child so they could be less burdened? Once again this is so preposterous that we know it would never even be a possibility.

Why is it, then, that when the killing of innocent children in the womb is being funded, it is acceptable or tolerable? Why is that not just as preposterous? It makes no sense to me that so many people who call themselves pro-life are willing to sacrifice thousands of babies a day for health care.

Just because someone is poor and cannot afford health care insurance does not mean they will not get the medical attention they need. Hospitals cannot refuse them; sure they will have a large bill but they will get the care they need. Does this large bill justify the killing of innocent babies? Of course not.

As long as the health care reform bill will provide for the killing of innocent little babies, we have no choice but to oppose it. We must be diligent in out efforts to expose the lies this President is trying to push down America’s throat and shine our lights brightly and boldly. We must get the message out that abortion is not health care.

For Christ I stand,